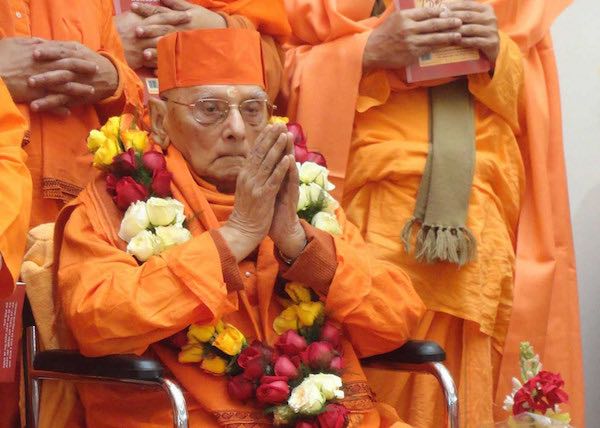 Here is the obiturary from Belur Math:

“With  deep  sorrow  we  announce  the  passing  away  of Swami Atmasthanandaji, President of Ramakrishna Math and Ramakrishna Mission, on Sunday, 18 June 2017 at about 5:30 pm at Ramakrishna Mission Seva Pratishthan hospital, Kolkata. He was 98. He had been admitted to Seva Pratishthan hospital on 21 February 2015 for treatment of old-age ailments.   In spite of best medical attention, his condition grew worse over the last few days and he passed away around 5.30 p.m. on 18 June 2017.

The cremation will take place at Belur Math on Monday, 19 June 2017 at about 9.30 p.m.  The gates of Belur Math will remain open all through the night of the 18th and through the 19th till the last rites are completed.

Born on  the  holy  Buddha  Purnima  day in  May 1919,  at  Sabajpur, near  Dhaka,  he received mantra diksha from Swami Vijnananandaji Maharaj (a monastic disciple of Sri Ramakrishna) in 1938 and joined the Ramakrishna Order at Belur Math on 3 January 1941 at the age of 22 years. In 1945, Swami Virajanandaji Maharaj, the sixth President of the Order, gave him Brahmacharya vows, and in 1949, Sannyasa vows and the name Swami Atmasthananda.

After serving the Order at Belur Math and the branches at Deoghar (Vidyapith) and Mayavati (Advaita Ashrama), he got the opportunity to serve Swami Virajanandaji Maharaj, the then President of the Order, for a long time.  He spent several years in his holy company in the solitude of Shyamla Tal in the Himalayas.   In 1952, he was posted to Ranchi TB Sanatorium branch as an Assistant Secretary. He worked hard to expand the Sanatorium’s services in many ways. He was sent to Rangoon (Yangon) Sevashrama as its Secretary in 1958.  He developed the Sevashrama hospital and it soon became the best hospital of Burma (Myanmar) at that time. When military rulers took over Rangoon Sevashrama, he returned to India in 1965.  He was posted to Rajkot branch as its head in 1966. The beautiful temple of Sri Ramakrishna at Rajkot Ashrama was built during his tenure on his initiative.

He was elected a Trustee of the Ramakrishna Math and Member of the Governing Body of  the  Ramakrishna  Mission  in  1973.    In  1975,  he  was  appointed  an Assistant  (General) Secretary of the twin organizations. Under his stewardship as Relief Secretary, the Math and Mission conducted massive relief and rehabilitation operations in various parts of India, Nepal and Bangladesh. He became the General Secretary of the Math and Mission in 1992 and continued to be in that post for five years till 1997 when he became a Vice-President of the Order.   He was elected President of the Ramakrishna Math and Ramakrishna Mission on 3 December 2007.

Swami Atmasthanandaji travelled extensively in various parts of the country and visited many branches of the Order and some unaffiliated centres.  In 1998, he visited various places in the USA, Canada, Japan and Singapore.  He also went to Malaysia, Fiji, Sri Lanka and Bangladesh at different times. In all those places, he spread the message of Sri Ramakrishna, Sri Sarada Devi, Swami Vivekananda and Vedanta and also gave  mantra  diksha to  many spiritual seekers.

He was one of the key persons to organize Pallimangal (integrated rural development) activities in Kamarpukur and Jayrambati, a youth training centre at Saradapitha (Belur) and many other social service programmes.”