Quietly nestled against a scenic mountain range, the Vedanta center in Santa Barbara overlooks the Pacific ocean. A convent of five nuns oversees the maintenance of the 45-acre property, manages the bookstore and facilitates public activities at the temple. 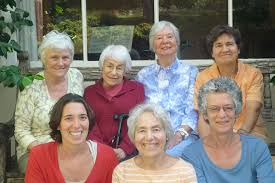 HISTORY OF THE CONVENT
In 1944, Spencer Kellogg donated his beautiful country estate in the hills of Santa Barbara to the Vedanta Society of Southern California. At the time, the property, as well as the rolling hills surrounding it, was largely undeveloped and thick with chaparral. The estate included a house, a small shrine building and an art room.

At first, the estate was used as a place of retreat for the monastics and lay members of the Vedanta Society in Hollywood. In 1946, a group of monks and a retired contractor came to Santa Barbara to build four bedrooms around the existing art room. When the renovation was completed in 1947, the estate was designated a convent and a group of nuns from the Hollywood center took up full-time residence. At this time, the first monastic vows for women were given to three members of the convent.

Public lectures began in 1954 and were given in the living room of the main house. Soon there were about seventy people regularly attending the lectures and the need for a temple became apparent. Lutah Maria Riggs, a well-known local architect, was hired and she designed a beautiful building inspired by early South Indian temples.

The temple was dedicated in 1956, and three years later it was the location for the vows of sannyas (final monastic vows) given to women in America for the first time by the Ramakrishna Order of India. The convent since that time has steadily developed and matured. As it moves into the 21st century, the convent, now firmly established, regards the future of women’s Western monasticism with optimism.