Swami Smarananandaji Maharaj was elected as the President of Ramakrishna Math and Ramakrishna Mission at the meeting of the Board of Trustees of the Math and the Governing Body of the Mission held on 17 July 2017. He is the 16th President of the Order.

He was born at village Andami in th 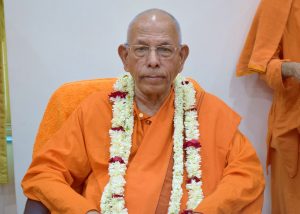 e district of Tanjavur, Tamil Nadu, in 1929. Having lost his mother at a very young age, he was brought up by his aunt. In 1946 he completed his secondary school in Chennai with very good results. Since his father was working in Nasik,  he went there and completed a diploma  course in commerce. Later, in 1949 he shifted to Mumbai where  he accepted a job and also continued his studies.

He was a voracious  reader and read many  English  literary works and books by Napoleon Hill on self-help.  He was also influenced by Mahatma Gandhiji’s thoughts. He started practising,  as advised by Gandhiji, the repetition of ‘Sri Rama’, and this became a turning  point in his life to set the stage for future events. Sometimes he used to go for a solitary walk to the Worli beach in Mumbai and spend time quietly sitting on the huge rocks there and watching  the setting sun. One day while sitting there, a thought came to his mind, ‘Well, these rocks  are so big, the sea is so vast, the sky looks infinite, then what am I – a little speck on the surface of the earth. Why give so much importance to it?’ Flash came the answer: It is true that you look like a speck on the surface of the earth, but within you there is a great presence which is greater than this universe. This thought came so forcefully that he felt someone was uttering those words into his ears. This idea lodged itself firmly in his mind. He was yet to read the Gita or the Upanishads at that time.

During this time he was staying in a hostel. One day while talking to a friend he came upon a report of the Mumbai branch of the Ramakrishna Order. He exclaimed:

‘Is there such a place in Mumbai!’ and asked his friend, ‘Will you take me there?’ His friend replied, ‘Yes, I will take you. But don’t tell anybody.’ Thus he started going to Mumbai Ashrama on the weekends.   He read books  of Ramakrishna-Vivekananda literature, mainly The Gospel of Sri Ramakrishna, Jnana Yoga and Thoughts of Power and derived  much insight and inspiration.   The urge to find a satisfying answer to queries ‘What is the meaning of this life?’ and ‘What should be my ideal  in life?’ which had been gnawing his mind became intense.  Repetition of ‘Sri Rama’ was also going on all along. One day, while travelling in a bus, the answer bubbled from his heart, just as it had happened at the Worli beach – ‘You will have to become a monk.’

By this time he had become close to Swami Aparnanandaji of Mumbai Ashrama. After much reflection  on the next  course of his life,  he joined, at the age  of 22, Mumbai Ashrama  as a Brahmacharin,  on the sacred birthday  of Sri Ramakrishna in 1952. Swami Shankaranandaji Maharaj, the seventh President of Ramakrishna Order, visited Mumbai Ashrama towards the end of the same year  and gave him Mantra Diksha. He also received from Swami Shankaranandaji Maharaj, Brahmacharya vows in 1956 and Sannyasa ordination  in 1960.

As  a  novice  at  Mumbai  Ashrama,  he worked in different  departments  of the Ashrama.  He  also participated in drought relief camp in Aurangabad district where he conducted relief operations very efficiently along with other monks.

He first visited Belur Math in the year 1954 along with Swami Sambuddhanandaji, the then Head of Mumbai Ashrama. During this time he attended the concluding celebrations of Holy Mother’s  birth centenary  and consecration  of Holy Mother’s temple at Jayrambati.

He was transferred to Kolkata branch of Advaita Ashrama in 1958. In 1961, he was sent to Mayavati to assist in the editing of Prabuddha Bharata. Along with his assignment,  he  took keen interest  in dairy, cultivation and other  activities  of the Mayavati Ashrama. He visited Mayavati  and stayed there for a number  of days on several  occasions, although  he, for the most part, stayed at Kolkata  branch of the Advaita  Ashrama. Advaita Ashrama,  being chiefly a  publishing house,  he enthusiastically worked to improve  the standard of publications, which received  a lot of appreciation.

He was posted to Ramakrishna Mission Saradapitha, an educational complex near Belur Math, as its Secretary in 1976. During his long tenure of about 15 years there, educational and rural welfare work of Saradapitha saw tremendous development.  He, along with his  monastic  assistants, took up extensive  relief  operations  during the devastating floods in West Bengal  in 1978.  From Saradapitha,  he was  posted  to Ramakrishna Math, Chennai, as its Head in December 1991. The construction of the present magnificent  Sri Ramakrishna Temple in Chennai Math was begun during his tenure.

As  General  Secretary  and Vice-President,  he travelled extensively in India and different parts of the world and visited the branches of the Math and Mission and also unaffiliated centres in those places.  Through those visits he endeavoured to spread the message  of Sri  Ramakrishna,  Sri  Sarada  Devi,  Swami  Vivekananda  and Vedanta among  a vast  number  of people.   He also gave Mantra  Diksha  to many spiritual seekers.  He has contributed  a number  of articles to various journals of Ramakrishna Order.

After serving as a Vice-President  for a decade he is now elected President of the Math and Mission.

A Thanksgiving Message from Swami Sarvadevananda