We are sorry to let you know about the passing of another long-time devotee, Cliff (Bhuma) Johnson. Bhuma was born on November 12, 1930 in Los Angeles, California. He grew up in Southern California with his parents Clive and Gwendolyn and sister Sandra. He graduated from UCLA (’53) with a B.A. in English, followed by an M.A from the University of Missouri (’59) and post-graduate work at Oxford University (’64.) There will be a memorial service on Saturday, December 1 at 3:30 pm. 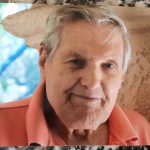 It was after UCLA that Cliff enlisted in the U.S. Navy (Ensign/LTJG). His tour of duty included Alaska, which proved to him his future home would always be sunny California. But before continuing his education he decided it was time to travel.

In late 1956 he boarded a freighter as a deck hand and took off for Oslo, Norway. He stayed for months as a deck hand before heading to Austria, where he spent months in a Hungarian refugee camp after the revolt against Soviet rule.

Cliff then ventured to Greece. During his month there he met a travelling partner, Jack. Together they hatched a plan to travel to India. Jumping on overcrowded trains and dilapidated busses they made their way to Istanbul, Turkey. Then onto Baghdad, Iraq where they purchased two motorcycles— which neither had ever ridden in their lives!

Through mountains, valleys, dirt and rocky roads, runaway streams, swamp lands, small villages, constant rain and cold and motorcycle breakdowns, they made their way thru Iraq to Tehran, Iran. Afterwards Cliff often expressed his love for the Islamic peoples who treated the two wanderers with love and hospitality. Next up was Pakistan and finally India. In Agra they marveled at the Taj Mahal. Cliff promised himself to re-visit India later in life,  which he did.

Back home, he entered the University of Missouri to earn a degree in journalism, returning after graduation to Southern California. Cliff began his career in journalism as a UPI reporter, and then city editor of the La Habra Star and teacher at Santa Barbara College.

In 1964 he became interested in Vedanta after attending a series of talks. He visited Swami Prabhavananda in Hollywood, and after initiation entered the Ramakrishna Monastery in Trabuco Canyon (1966).  Later, when he took the vows of brahmacarya, he was given the name of “Bhuma”, or “infinite”. He loved his time at Trabuco, residing in a small room directly across from the library.  So many times he has said that his time at Trabuco was a golden age, “the best ten years of my life.”

After he left the monastery, Bhuma remained an active member of the Vedanta Society of Southern California, often attending lectures and pujas. VSSC board president Bill Fray appointed Bhuma to serve on the board’s nominating committee, a position he held for many years.

Over the years Bhuma served several charitable organizations, including the Braille Institute, the Organization for the Physically Impaired, and the Miracle League of Arizona (baseball for disabled children.) He provided financial support to numerous charities and prisoners, as well as to personal friends who needed assistance. He did not judge, and never had a negative word for anybody. He constantly saw the goodness in each and every person he met.

His most meaningful volunteer experience began in the mid-nineties with the West San Gabriel Valley Boys and Girls Club. For ten years he would drive every Thursday from his apartment in Studio City to the club in Monterey Park to meet with his Meditation Club.

His Inner Quest publishing company published Inner Peace in a Busy World, a practical how-to book for young people to practice meditation. He and his buddy Dan Haren would take trips with “his kids” to his old home, the Trabuco Monastery.

Bhuma’s health took a turn for the worse in February 2017 due to a fall that broke his leg. After four months in a hospital and nursing facility he was transferred to a board-and-care in Lake Forest. Fortunately for his friends, it was only twenty minutes from Trabuco.

Though Bhuma was confined to bed, his dear friend Mark Cleary was able to transport him on five or six occasions to the monastery where they had lived as brother monks together. Bhuma very much enjoyed having lunch with the monastic brothers and reminiscing about the old days, remembering Tadatmananda, Asim and the many other brothers that had passed away before them. Looking at Bhuma sitting blissfully in the shrine once again, a good friend could only smile through tears of joy as he realized Bhuma had now really come home.

Bhuma passed away on October 8th at 4am. The last words his buddy Dan heard from his lips were “Jai Sri Ramakrishna!”