We are sorry to let you know that longtime devotee Kumiko Debbie Inoue, known to us as Devi, left her body on February 19, 2019.

Devi was born in Osaka, Japan in 1931. In the 1950s, she joined a group which was based on Sri Ramakrishna’s Teachings at Sakai, Osaka, Japan, and stayed with them for decades. In the 50s, she often visited India, and received initiation from Swami Madhvananda Maharaj at Belur Math.

In 1967–8, she stayed at Sri Sarada Math, Dakshineswar. Some nuns there still remember her.

In 1969, the group that she was associated with moved to Takatsuki, Osaka. In 1970, she was asked to teach Japanese at Madras. But after four or five years, they had to close the place because of financial problems.

About 1976 this group then started an institution to exchange Japanese culture at Ajmer, India. They also operated a dispensary. She served there for about three years. After the Indian immigration policy changed, she had to leave India.

Subsequently, they started to run an orphanage in Bangladesh. She served there for about three years. The activities of this group changed and they decided to move to the United States. So she also followed them to the US in about 1980. She had learned English in Japan, and spoke it well.

In order to help establish this group in the US, she started a house-painting business. She supported them for several years, but finally could no longer accept their ideals and concepts, so she left this group.

When she came to Hollywood Center in about 2007, she voluntarily painted the windowsills of the Vedanta Press—which had been ignored—saying, “I cannot stand to see it like this!” After that she also painted the wooden tables that we use for preparing flowers for the big pujas, the temple window sills, and the shrine closet.

Her philosophy of life was always to serve others with whatever was in her abilities. She did not care about appreciation from others. Indeed, her ideal was always to worship God through the service of others.

She left her body very peacefully on February 14th. Always her smile is in our heart. 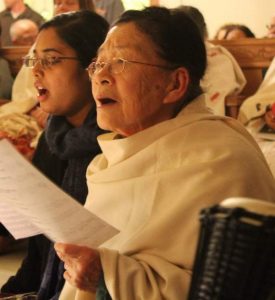